Posted on September 8, 2020 by Freedoms Herald | Comments Off on SMHRIC: Crackdown intensifies as the resistance continues

As the region-wide massive civil disobedience resistance movement continues across Chinese-occupied Southern Mongolia, desperate Chinese authorities are carrying out a full-blown crackdown through any means possible.

The Chinese Public Security authorities at all levels are carrying out coordinated mass arrests across the region. The targets include protestors, parents who refuse to cooperate with the authorities, WeChat group administrators, and individuals who spread the word about protests on the Internet.

Following wanted posters offering bounties for information leading to the arrest of hundreds of Mongolian protesters, a number of notices of arrest and detention have been issued by local public security bureaus in different parts of Southern Mongolia.

In one of these notices, the Public Security Bureau of Naiman Banner and Horchin Left Wind Middle Banner states that “17 people have been arrested in accordance with the law.” The notice says, “Some individuals spread false and harmful information on the Internet” and “viciously disrupted students’ normal schooling and created an adverse social impact.” 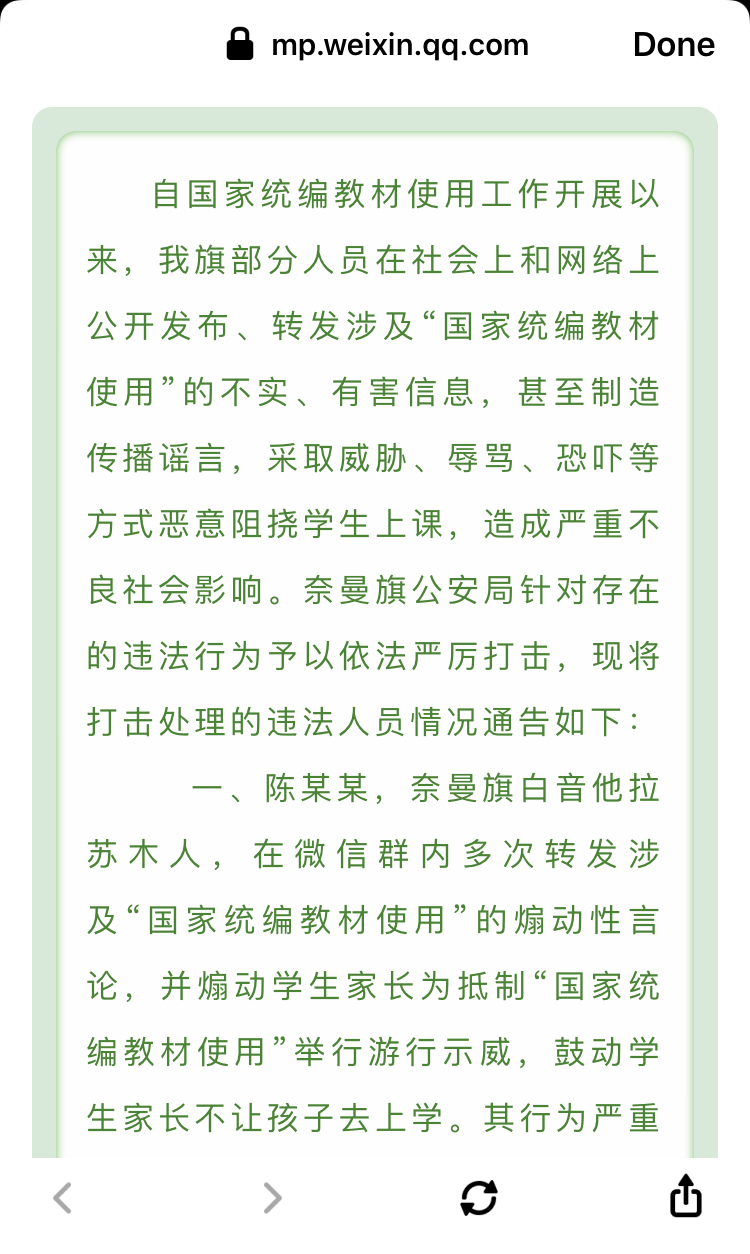 17 arrested for spreading “false and harmful information” on the Internet

In addition to arrest and detention, local authorities at all levels are threatening parents who continue to keep their children home with termination of employment, expulsion from their positions, confiscation of property, and cutting of social benefits.

In a written warning issued by the Office of the Bairin Right Banner Party Committee, all levels of party committees, government, and party local branches, administrative offices, civil societies, and business units are requested to have their employees send their children to school by September 7, 2020. Those who refuse to send their children will be subjected to “termination of employment and suspension of salary effective immediately starting September 8” and will be given “concentration training.”

Notices issued by the local authorities show that an increasing number of Mongolian employees with government, party, and educational affiliations who have refused to send their children to school are being removed from positions and fired from their jobs.

For instance, five Mongolian employees with government affiliations in western Southern Mongolia’s Ezen-Horoo Banner of the Ordos region have been fired for “refusing to execute the key national strategic deployment”. The local authorities said that the five’s “benefits have been revoked, and the banner’s Commission for Discipline Inspection is starting the process of thorough investigation.”

Mongolians believe that the tone of the handling of this resistance movement was already set by the Chinese Minister of Public Security Mr. Zhao Kezhi in his recent visit to Southern Mongolia. According to a Xinhua News report posted on the website of the State Council of the People’s Republic of China, Zhao Kezhi emphasized that Public Security authorities must “unshakably follow the Party’s absolute leadership” and “deepen and enhance the anti-separatism struggle, seamlessly implement the anti-terrorism preventive measures, [and] firmly maintain the stability in minority and religious areas, to carry out the work of enhancing ethnic harmony.”

Despite the mass arrests and harsh punishment, the vast majority of parents are still refusing to send their children to school. Messages from eyewitnesses confirm that schools and classrooms are mostly empty, and no Mongolian school has officially started.

As the WeChat group chat feature was completely shut down in Southern Mongolia, parents are communicating with each other through individual messaging to spread the word in coded language.