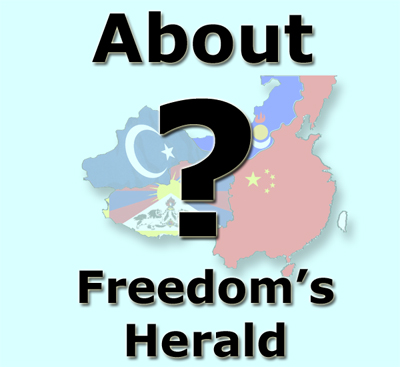 Freedom's Herald is an effort motivated by concern for the human rights and dignity of fellow human beings under the rule of the Chinese Communist Party.

The Chinese government begged for opposition when they opened a propaganda theme park in our backyard. The park was touted as an 'educational experience' and special deals were accorded school field trips. The exhibits passed off such ideas as 'Genghis Khan was Chinese,' and 'Tibetans are Chinese.' Essentially twisting the portrayal of cultural icons of non-Chinese peoples with the purpose of rewriting history and then exposing their version of history to school-aged children as fact. And what if there was no rebuttal in the classroom?

As members of a global coalition against the Florida Splendid China theme park, we walked along the path and witnessed the outrageous behavior of the Chinese government in our own country. At one time, there were security folks in suits and concealed holstered weapons - in a theme park? People that came to demonstrations at the park suffered recriminations when their relatives called after the Public Security Bureau (PSB) dropped by their house to tell them to knock it off. Subsequent calls usually had the PSB agents get on the phone and threaten their family members with beatings or prison. There were over forty performers that found conditions so intolerable as to escape the theme park and file for political asylum. The situation was so bad for them that they left their passports and any hope of seeing their families or homeland again. We could go on...

After the park closed at the end of 2003, the park's closure was attributed to the downturn in the economy from the Sept. 11th attacks. Obviously, there were differing opinions. In April 2004, an Op-Ed was published in Insight Magazine that stated the park would have remained open except that Citizens Against Communist Chinese Propaganda had successfully countered their message and the resultant perception did not aid their propaganda goals.

In June 2004, the Chinese Consulate in Houston rang us up and in subtle terms threatened the safety and well being of family members. The family decision was to cease political activities.

When the attitude changed to 'my children will be as safe as the children of Chinese government officials,' Freedom's Herald was started to provide information on a low-key basis.

As this was being written in April 2012, over twenty Tibetans had found conditions so bad as to burn themselves alive (by mid-2013 the number has increased to over 100,) groups of Uyghur men are being gunned down because they congregated, local governments are taking away the hereditary lands of herders, hundreds (if not thousands) of missiles are pointed at Taiwan, and the cultures of the people of Tibet, Eastern Turkestan and Southern (Inner) Mongolia are being snuffed out by regulations, policies, and laws. Political dissent will land you in jail and if you do not recant, you remain there.

The low-key approach is over. We're in.